Bite my sparkling metal wires, both of them!

We are given challenge.hex and from the challenge tags we know that this is AVR machine code.

This challenge involved a few stages that I have separated into several sections:

My disassembler-of-choice is Binary Ninja. To disassemble this code, we first need to convert it to a binary format:

For this challenge I used the binaryninja_avr plugin by Kevin Hamacher which is available directly throught the Binary Ninja plugin manager.

For most reversing tasks, I find it helpful to interact with the program a bit to get a sense of what the program does. This context will give you a good foundation for how to think about the internal components.

In this case, the program just lets you store notes. At the [COMMAND] : prompt, we can type either new, list, del, edit or help:

Now that we have a sense of the structure, we can dive into the disassembly…

Finding string references is really useful when reversing because they act almost like debug symbols. However, with AVR there are some details to be aware of that make this a bit trickier.

When you flash an AVR chip, you are setting ROM. However, during the initialization procedure the program typically copies the data portion of the code into RAM which makes it readable and writeable. Since the compiler knows this, all of the code implicitly references data in RAM instead. Unlike an ELF file where the sections mappings are visible in the header, the mapping here is actually just a loop in the reset procedure and so our disassmebler doesn’t know about it. 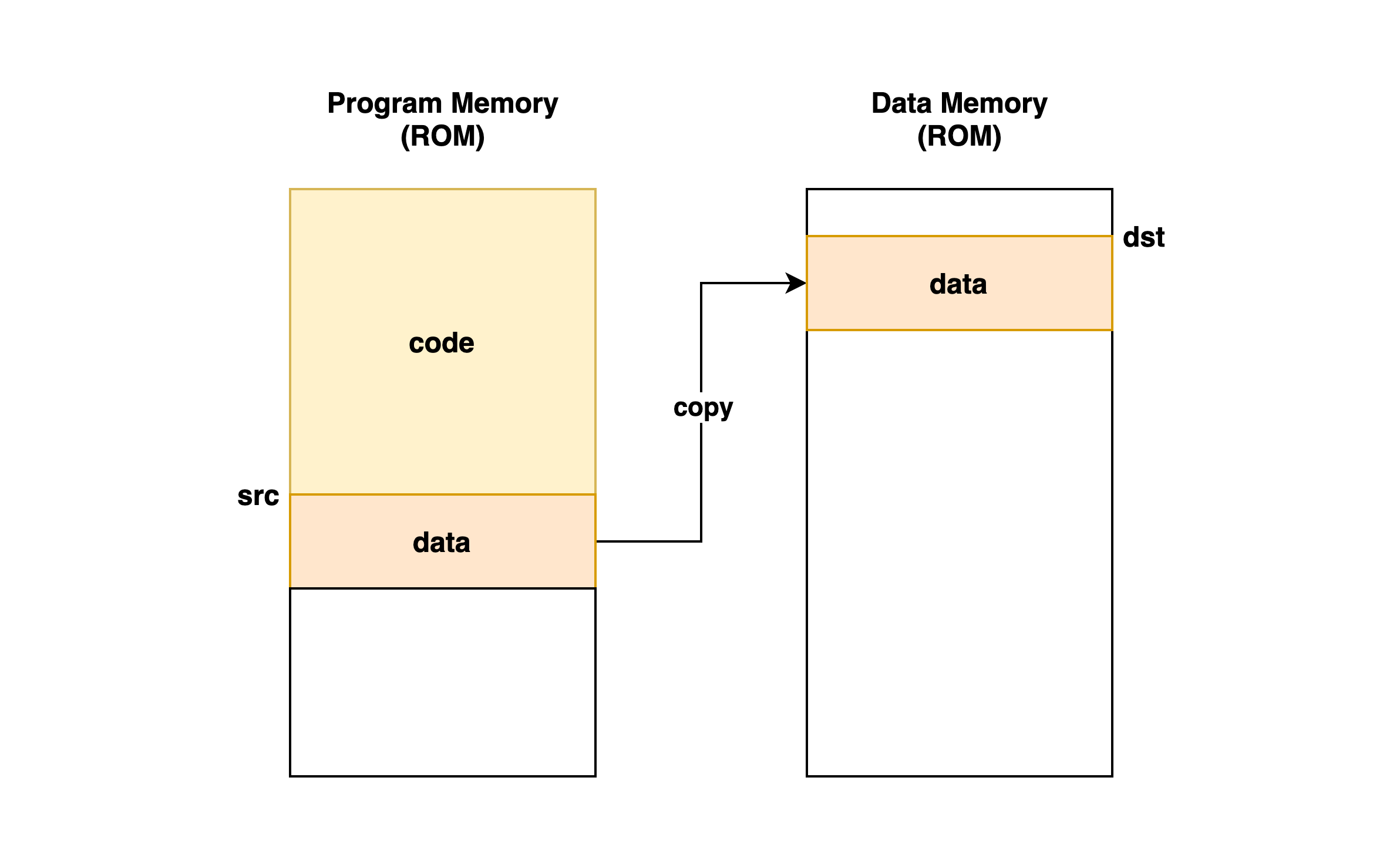 So to fix this, we need to identify the src and dst pointers in the copy loop and then we can convert our RAM address (that the code uses) to the original ROM address in order to find the corresponding string. 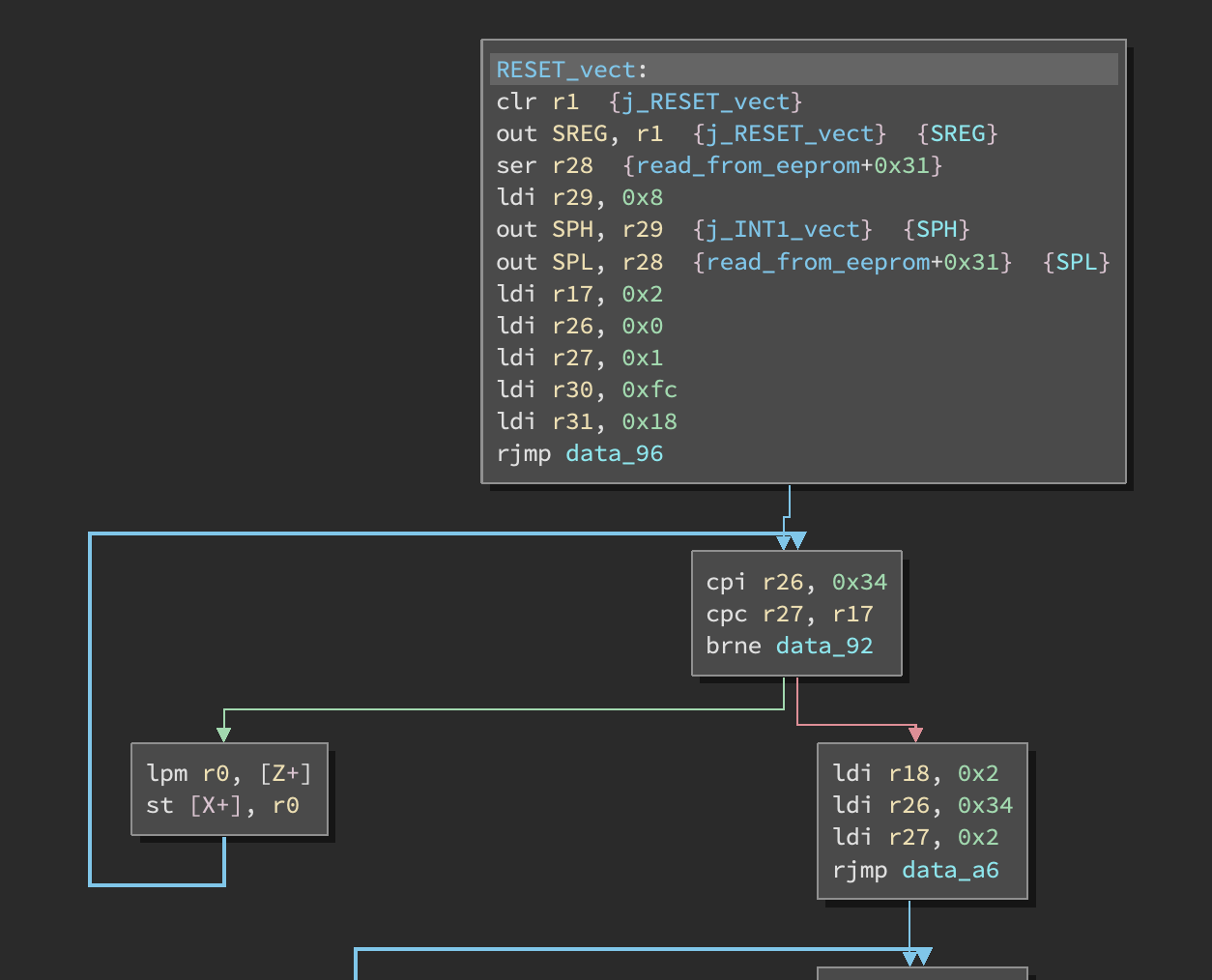 Now for example in main, we can identify references: 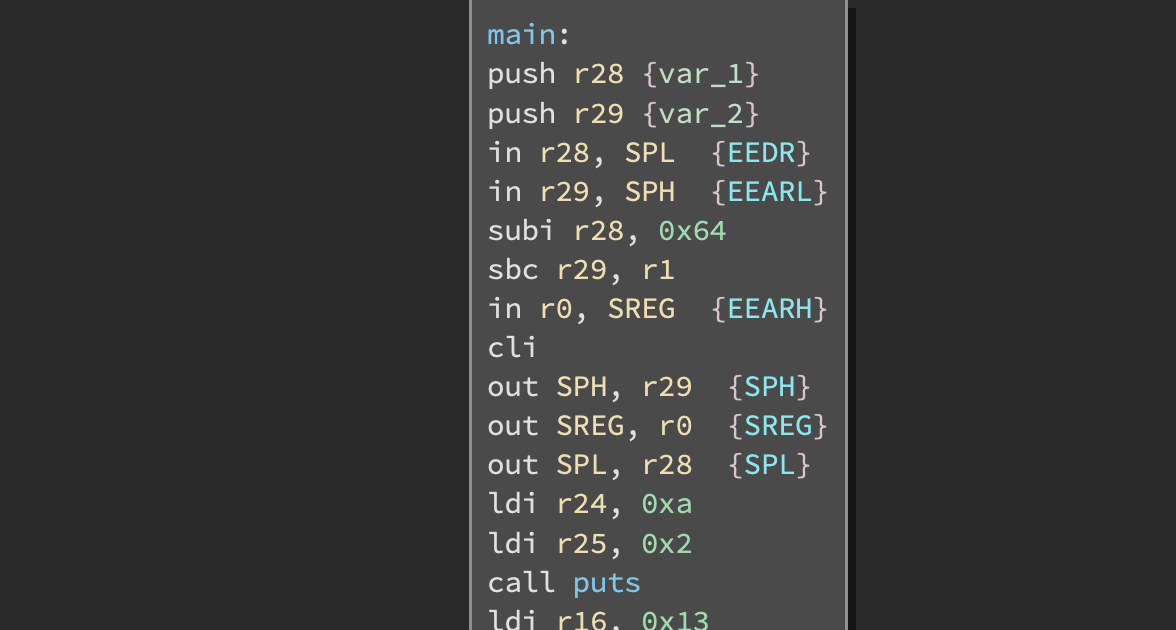 I wrote a short python snippet that would do this remap and print out the string and used it to annotate the disassembly in a few places.

I spent about 4 hours going through each function in great detail and annotating things in the disassembly. Binja had a hard time with AVR calling convention so I spent most of my time in the graph view looking at raw disassembly.

During the reversing process I found the following information:

I also spent some time reversing the eeprom_read and eeprom_write functions. These functions use the TWI I2C protocol (hence twi-light). I wasn’t familiar with this protocol before this challenge so I spent some time reading about it. I found this article which gives example code to interface with an EEPROM and it matched the code I found in the binary very closely.

Essentially, TWI lets us communicate to periphal devices on a shared bus. There is some fancy architecture to make sure devices don’t talk at the same time (basically a mutex lock). For the purposes of this challenge, the important part is that once we have control of the data bus, we can send read commands to an EEPROM. First we send a byte to identify the target device and the mode: 0xa0 – bit 0 is off so this is a write, the remaining bits specify the device identifier. Then we send one or two bytes to indicate the address (in EEPROM). Finally, we can either send more bytes to write data or send 0xa1 and start reading bytes.

(Note: the context of bytes is distinguished by setting different values in TWI control registers so for example, we can send 0xa1 as a “command” byte or a “data” byte)

For other AVR challenges I’ve used simavr to run AVR binaries locally. In this case I was able to reuse a very similar setup with the addition of the EEPROM device. See the linked writeup for an intro to simavr.

For this challenge, I just patched the board_simduino/simduino.c example:

Setup an EEPROM buffer and call i2c_eeprom_init and i2c_eeprom_attach once we have our avr object:

Simavr also lets us pre-configure the EEPROM memory which I found really useful when testing.

Now we can run the simduino.elf with our challenge.hex and attach avr-gdb and picocom. Unfortunately I found that the serial connection is reaaaaally slow. I could only enter “list” locally by typing list and then spamming enter. I have no idea why it’s so slow. If you have a workaround please let me know!

With the bugs identified during reversing, I was able to craft a proof-of-concept exploit that causes a buffer overflow with controlled values: 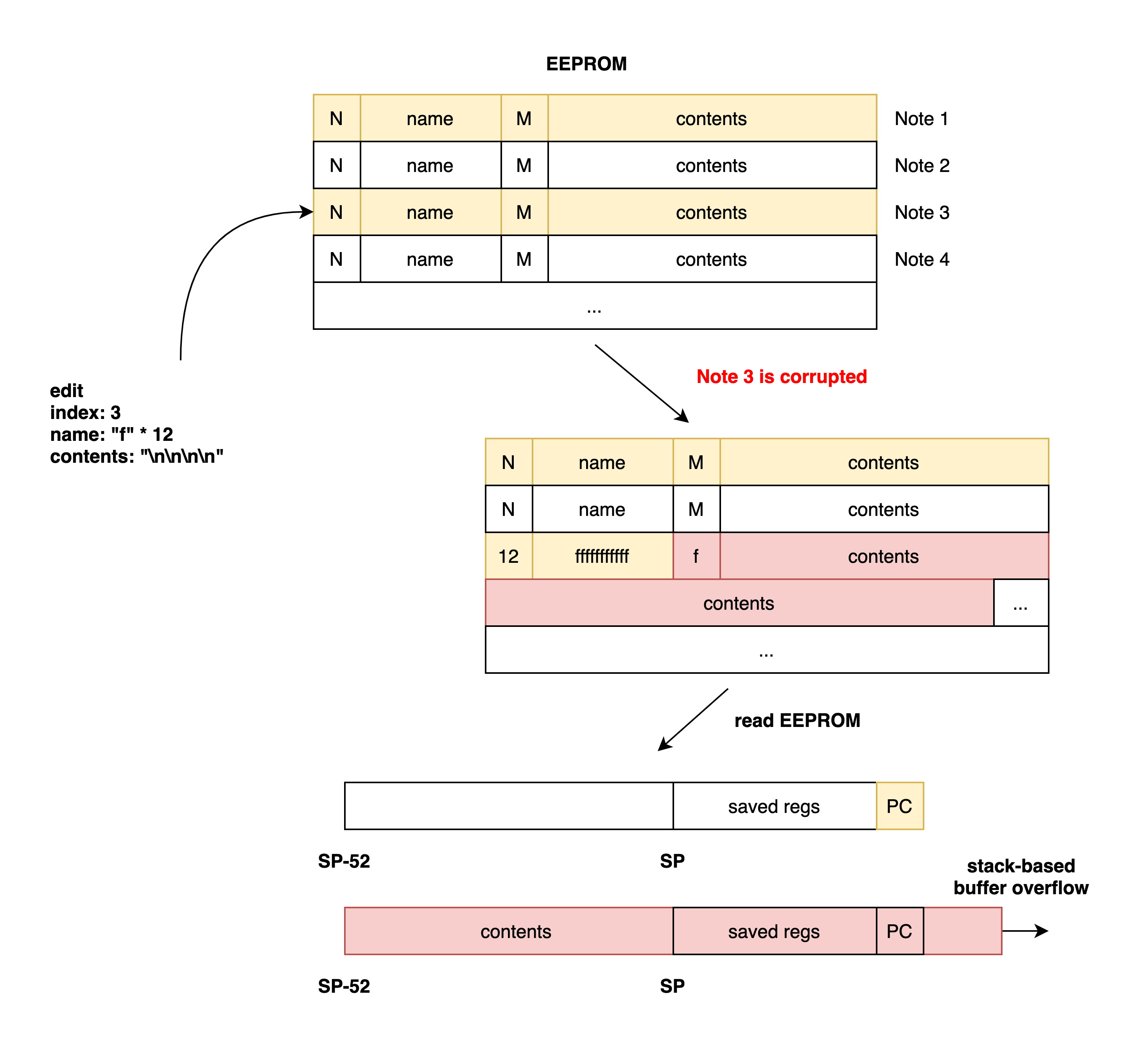 Using the off-by-one bug in the name field, we can corrupt the size of a note’s content. Then when we read from EEPROM, it will read too many bytes on the stack and cause a buffer overflow. The bytes that end up overflowing the saved PC come from the next note’s content. So in this exploit, we can put a ropchain in note 4, then corrupt note 3 and get a controlled overflow.

We can verify that this techique works on remote by putting the address right before a puts call to see if we can get it to print a string it wouldn’t normally print.

In my final exploit, I write the ropchain several times in overlapping segments so I can include null bytes.

The remote EEPROM is pre-programmed with two notes:

From these hints, it seems pretty clear that there is a second EEPROM device somewhere that probably has the flag.

The first EEPROM has the hardcoded address 0xa0 from the source code but we don’t know the address of the other one. Luckily this is just a 7-bit brute force.

For the ropchain we basically need to do:

We can repurpose some of the existing twi functions to handle these things. Specifically I found the following:

I also found a 6-byte gadget to control r24 and a putchar gadget that sets r25 to 0 and then calls putchar.

Using all of these gadgets, we can build a ropchain like the following:

Using this logic, I scanned for all the devices and got output like the following:

column 0 is (target « 1), column 1 is the output byte and column 2 is the hex version of the output byte. Apart from the expected byte at 0xa0 (from the known EEPROM) I didn’t see any other data.

After some confusion I realized that there was actually a valid byte at base 0x6a! I changed the program to start reading sequential bytes from that device and found the flag: midnight{two_wires_should_be_enough_for_anyone}.

The full exploit is listed below: