Laura is very curious and ended up discovering that the leaders of the city-state of Rhiza share a secret. This secret is only revealed when they are all gathered. Due to the carelessness of one of them, Laura was able to intercept the message with the program to be used at the time of the disclosure and extract it. But, despite all her efforts, Laura was unable to reveal the shared secret. Therefore, she needs help to understand how the program works and finally find out what this secret is!

NOTE: The binary was built using the arm toolchain from the Ubuntu 16.04 official repos.

NOTE: Not all hosts it tries to connect to should be online. Please try all possible hierarchies.

I competed with DiceGang for pwn2win 2021 and we ended up getting first place and qualifying for DEFCON CTF. After just narrowly missing 1st place at PlaidCTF due to some flag hoarding tactics by Perfect Blue, we were extra cautious and used a similar strategy here. We saved most of our flags until the very end, to the surprise of most people including uuunderflow who were leading for most of the competition.

I think most of us would have preferred to submit flags on-schedule as we solved challenges. However, flag hoarding is unfortunately an effective strategy if the top team gets lulled into a false sense of security as s1r1u5 (playing on uuunderflow) points out: https://twitter.com/S1r1u5_/status/1399041957876289537

In most CTFs, flag hoarding can be dangerous because you are never 100% certain about some flags, often you need to submit to the scoreboard to ensure you have the right flag. However, pwn2win used the NIZKCTF platform which allowed us to verify all of our flags offline.

Detecting (and hence banning) flag hoarding is pretty hard. In some cases, certain teams have a reputation of flag hoarding which makes it predictable (you know who you are). In our case, I don’t think anyone expected it. However, the first two real flags we submitted were 1st blood on the Botnet challenge which ended up getting 4 solves and 2nd blood on the Apple II challenge which ended up getting 11 solves. Considering we solved these challenges and not the “easier” ones, this might have clued people in to the fact we were playing competitively.

Highest Power was a reversing problem which ended up only getting solved by us. This was definitely a collaborative effort. We had about 1-3 people working on this continuously for ~20 hours (see the timeline at the end for details).

The main function accepts an incoming connection and sets up some function pointers in a context struct: 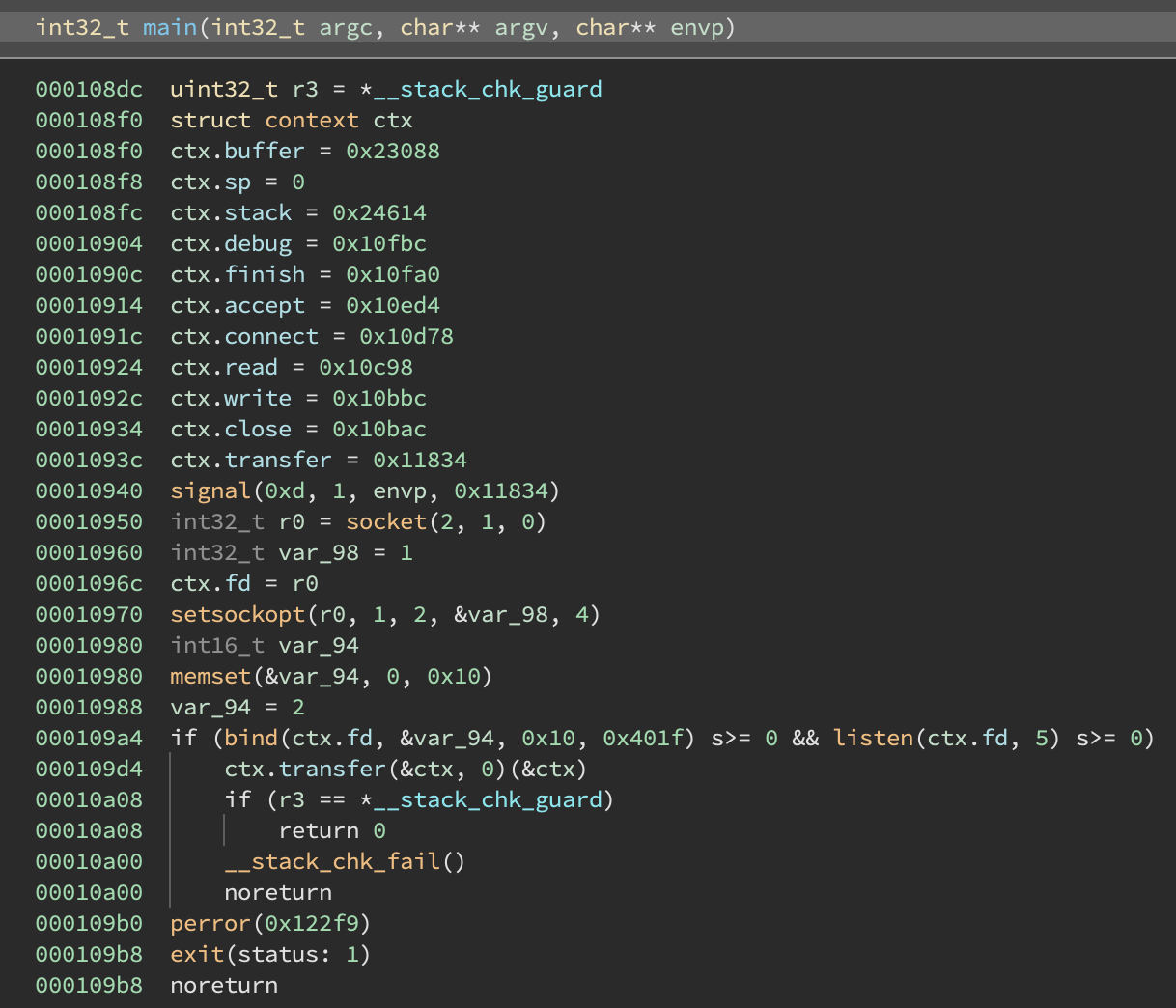 It consists of several handler functions (debug, finish, accept,…) a stack + stack pointer, and a memory segment (mem). This context struct acts as a VM context as we will see later.

After receiving a connection, main calls ctx.transfer(&ctx, 0) which initiates a just-in-time compilation event, generating ARM code on-the-fly and then allocating an executable memory segment which it jumps to. The second parameter to transfer specifies the function index and can be in the range [0,39] inclusive.

The JIT’ed code is fairly regular and after staring at it, we can identify some patterns and pull out the VM instructions: 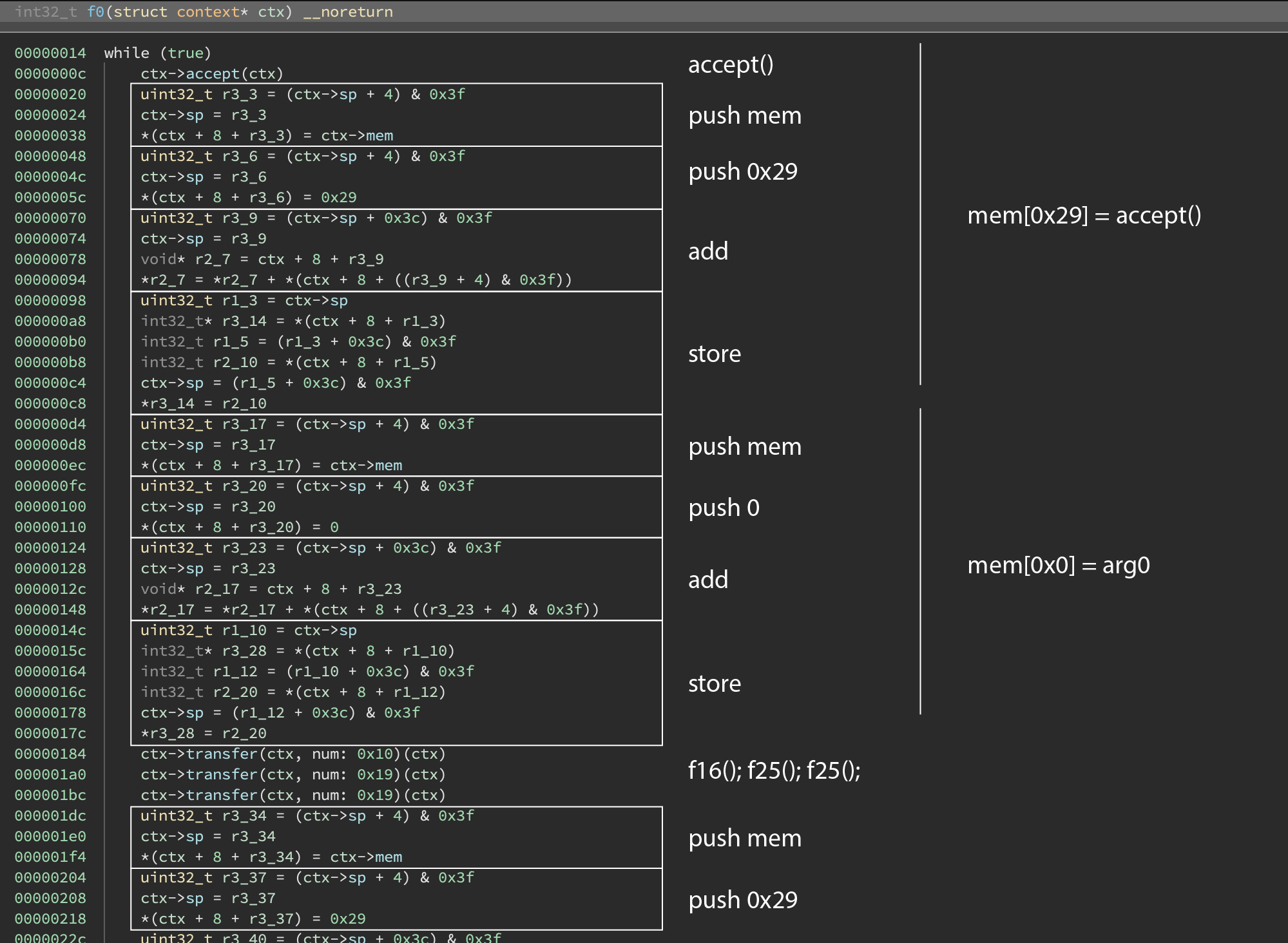 We dumped all 40 of the functions into a large binary to analyze further (see merged.bin).

During the competition, we set up a HackMD and manually disassembled all 40 of the functions (see a copy here) and then tried to generate some more readable high-level code and figure out what was going on.

The main function is f0 which does the following:

Essentially it waits for a new connection on port 8000 and then it checks if the input string is GET /gather_everyone_to_reveal_our_secret (f16) and then verifies that the requester ip address starts with 10 (f10). If both these things are true, it executes f1:

This function returns HTTP/1.0 200 OK\r\n\r\n and then tries to communicate with two peer servers (f5) before finally executing f3 which does some crypto mumbo jumbo and prints out some random looking characters.

In f16, the GET request can optionally specify an argument from 0 to 2 inclusive like: GET /gather_everyone_to_reveal_our_secret?1 If this is omitted, it defaults to 2.

The peer communication routine does the following:

Specifically, it constructs a new HTTP GET request that invokes GET /gather_everyone_to_reveal_our_secret?x where x is the current parameter minus 1. If x is 0, f5 just exits. After receiving the result, it invokes f6 which uses the 32 byte output to xor a stored key (at offset 8 in the VM context).

The peer selection process seemed to be deterministic based on the value of the requester ip and it always produced an IP address in the 10.x.x.x range.

At this point we were a little confused about the IP filter. The 10.x.x.x IP block is allocated for local ip addresses and if there was a challenge server running that expected a local ip, we would somehow need to get on the same network first.

We briefly tried using an RCE on a different challenge to ping some servers in the 10.x.x.x range with the idea that if the pwn2win authors had created a server running this challenge it would be in the same cluster. We didn’t get any responses and then we started rethinking the process.

The interesting thing was that the output of the server appeared to be based on the requester IP address and the output values of the two peer servers. So our pseudo-code for computing the 32 byte outpus looks something like:

We would somehow need to brute force all possible requester ip’s to try every possible tree of values in the hopes that one combination would produce the flag.

After re-reading the challenge description, we saw the following: Not all hosts it tries to connect to should be online. Please try all possible hierarchies.

So if some hosts are offline, our model looks more like:

We noticed that if both peers were offline, the output buffer would be the same as if we invoked with the argument 0 (indicating a leaf node).

At this point we understood that we needed to sample all possible initial requester IP’s and all possible tree hierarchies. So the next step was to implement this solution.

First we tried simply using a gdb script to hook and modify the requester IP during execution. For example the following sets the IP to 10.18.52.86:

This proved to be very slow, mainly due to the fact that this was running inside QEMU (due to being an ARM executable).

Next we re-implemented the program logic in Python and this was much faster but it was expected to take several hours to finish the search and that would be close to the end of the competition so we decided to optimize further.

To maximize the chances of succeeding, three of us decided to re-implement in separate languages. I (hgarrereyn) rewrote in C, defund in C++ and Aplet123 in Rust.

Around this time Aplet123 also wrote a really cool JIT-disassmbler in Python to ensure we didn’t screw up any of the emulation steps.

Eventually we got the C version working and the brute force was now feasible. The solution flow essentially works like this:

We implemented poor-man’s multiparallelism (coloquially referred to as DiceGrid™) by having multiple people in the Discord compile and rerun each variant of the 3rd phase, tracking progress in Google sheets.

See rep.c for our C implementation of this problem.

(all times in central time)